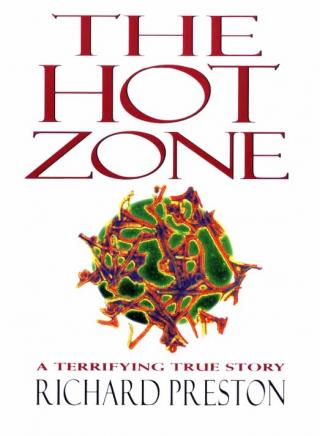 A highly infectious, deadly virus from the central African rain forest suddenly appears in the suburbs of Washington, D.C. There is no cure. In a few days 90 percent of its victims are dead. A secret military SWAT team of soldiers and scientists is mobilized to stop the outbreak of this exotic “hot” virus. The Hot Zone tells this dramatic story, giving a hair-raising account of the appearance of rare and lethal viruses and their “crashes” into the human race. Shocking, frightening, and impossible to ignore, The Hot Zone proves that truth really is scarier than fiction.
* * *
This book describes events between 1967 and 1993. The incubation period of the viruses in this book is less than twenty-four days. No one who suffered from any of the viruses or who was in contact with anyone suffering from them can catch or spread the viruses outside of the incubation period. None of the living people referred to in this book suffer from a contagious disease. The viruses cannot survive independently for more than ten days unless the viruses are preserved and frozen with special procedures and laboratory equipment. Thus none of the locations in Reston or the Washington, D.C. area described in this book is infective or dangerous.

The Demon in the Freezer