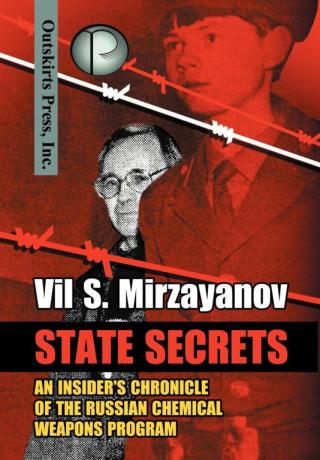 This is the book nobody wants you to read.
An unparalleled deception took place in the 1980s, while U.S.S.R. President Mikhail Gorbachev was negotiating for the Chemical Weapons Convention. This treaty was supposed to destroy chemical weapons of the world and ban new ones. The Moscow institute that developed chemical weapons at that same time was secretly developing newer and greatly more toxic ones known anecdotally as Novichok and new binaries. Dr. Vil Mirzayanov, a scientist there, was responsible for developing methods of detecting extremely minute traces in the environment surrounding the institute. He decided this dangerous hypocrisy was not tolerable, and he became the first whistleblower to reveal the Russian chemical weapons program to the world. His book, State Secrets, takes a startling detailed look at the inside workings of the Russian chemical weapons program, and it tells how the Russians set up a new program in Syria. Mirzayanov’s book provides a shocking, up-close examination of Russia’s military and political complex and its extraordinary efforts to hide dangerous weapons from the world. State Secrets should serve as a chilling cautionary tale for the world over.

“The persecution of Dr. Mirzayanov stands in direct contradiction of the Clinton Administration’s commitment to strengthen democratization efforts in the former Soviet Union, and halt the proliferation of weapons of mass destruction. I am confident that you share my deep concern over the treatment of this courageous scientist, and I call on you to personally appeal for his release.”
– From the Letter of John Conyers, Jr., Chairman of the Congressional Legislation and National Security Subcommittee of the Committee on Government Operations, to Warren Christopher, the U.S. Secretary of State, October 19, 1993.

“I personally feel a strong common bond with this courageous man, recognizing that his motives are the same as those that led me to release the Pentagon Papers.
The Mirzayanov case is an immediate legal litmus test of emerging Russian democracy. He is an individual in the true tradition of Andrei Sakharov, a man persecuted under the former regime for telling the truth, but now, rightfully, universally honored.”
– By Dan Ellsberg, author of “Secrets – A Memoir of Vietnam and the Pentagon Papers”

“I was proud to add my voice to that of the many scientific and human rights organizations that have worked to free Dr. Mirzayanov.
– Senator Patrick Moynihan, U.S. Senate (Congressional Record. Proceedings and Debates of the 103d Congress, First Session. Vol.140, No. 28. Washington, Tuesday, March 15, 1994.)

“…in recognition of his courage and his singular demonstration of the moral responsibility of individual scientists in uphold the integrity of scientific knowledge in an emerging democratic society”. The 1994 Heinz R. Pagels Human Rights of Scientific Award of The New York Academy of Sciences.
– Signed by Chairman Cyril M. Harris and President Joshua Lederberg.

“Cavallo Foundation Inc. takes great pleasure in presenting a Certificate of Special Recognition for Moral Courage in Business and Government to Vil Mirzayanov.”
– From the Text of the Award in June 1993.

“For his integrity as a scientist, strength of character, and exceptional personal courage that served to promote the health, safety, and welfare of the Russian people and of all humankind.”
– From the Text of the 1995 AAAS Freedom and Responsibility Award.