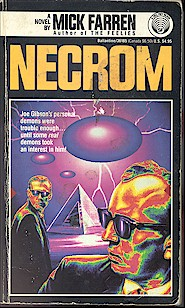 Joe Gibson is a washed-up alcoholic rock star, an ex-rebel who's now nothing but an embarrassment. When the TV starts sending him messages one night, he's inclined to write it off as no more than a bad case of DTs. Fortunately for Joe, the TV messages are followed up by a visit from a representative of the Nine, a shadowy council of mystics and seers, who warns Joe that he's on a voodoo hitlist.
Thus begins a chaotic interdimensional chase, in which Gibson confronts tontons macoutes; psychic interference; UFOs; a very hip, and very scary, demon called Yancey Slide; and the ultimate transdimensional threat – Necrom itself.
A precursor to the thoroughgoing non-realism of his later book, Jim Morrison's Adventures In The Afterlife, Necrom sees Farren making playful use of some of the wilder jetsam of theosophy and parapsychology to drive an excellent thriller.

Slide On The Run

Jim Morrison’s Adventures in the Afterlife