Loves Me, Loves Me Knot 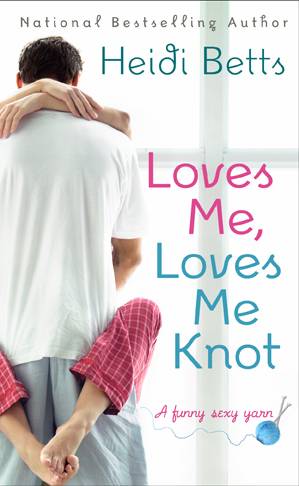 Jenna Langan knows what she wants, and as she tells her best friends after their weekly knitting group, she doesn't need a man to give it to her.only a few of his best swimmers. And just because her marriage to undercover vice cop Gage Marshall ended badly doesn't mean he can't still give her the baby she's always wanted. In fact, she's willing to bet a couple of her favorite hand-knit boas that she can tie him up in knots he'll definitely enjoy.
An unexpected seduction is one thing, but stud service? No, thank you. Gage had his reasons for pulling the plug on his happily ever after with Jenna, and nothing that's happened since their divorce has changed his mind. That is, until Jenna got it into her head to tie him up and drag him down. Now he has no choice but to stick around until he knows for sure if his ex-wife is pregnant. But the more time he spends with Jenna, the more his resolve begins to unravel.