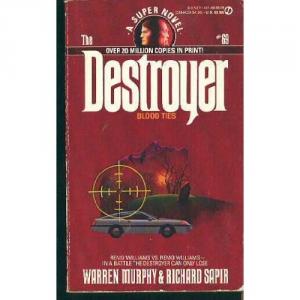 The Guru of Garbage
Lyle Lavellette was known to some as Detroit's maverick genius, and to others as the biggest gasbag the auto city had ever seen. But now this golden-tongued tycoon had proved his critics wrong by producing a car that could free Americans from the oily grip of OPEC. His new car would run on compressed garbage and consign all other carmakers to the refuse heap. When a deadly assassin is sent to throw a bloody monkey wrench into Lavellette's odiferous enterprise, the Destroyer and his Oriental mentor Chiun are sent in to stop the slaying-only to find out that the name of the mysterious hit man was Remo Williams. Remo Williams? The one man the Destroyer could not destroy!