The Trail of Fu Manchu 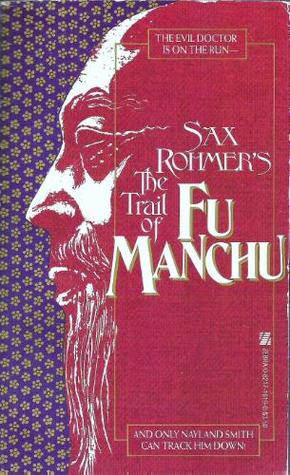 The advenuters of Nayland Smith continue as the fearless hero once again squares off with the diabolical Fu Manchu!
_______________
This book, the seventh of 14 in Sax Rohmer's Fu Manchu series, finds the good Dr. in pretty desperate straits following the events of book #6, "The Bride of Fu Manchu." In this installment, he is a hunted man, cut off from his funds, the bulk of his Si-Fan associates, and the elixir vitae that is preserving his life. This book is something of a radical departure from the previous six in that there is no first-person narrator, but at the same time hearkens back to the tone of the first three volumes in the series, in that the action takes place in the Surrey and Limehouse regions of London. Nayland Smith, Dr. Petrie and Alan Sterling are all back, as are Fleurette and Fah Lo Suee. This book introduces the character of Inspector Gallaho from Scotland Yard, as cool and tough an ally as any bunch of Fu fighters could hope for. The story this time concerns Fu Manchu's kidnapping of Fleurette Petrie away from her father. There is also a wonderful side plot in which it is discovered that Fu has been making his own gold, alchemist style, in an abandoned tunnel under the Thames River. The raiding of this factory takes up fully 1/4 of the book, and is a very well done and suspenseful set piece. Multiple narrative strands converge here in bravura manner; a first-person narrative could not have allowed for these wonderful scenes. One of the long-standing characters in the series meets an end here, and it is a shocking moment when it comes.

The Mask of Fu Manchu

The Wrath of Fu Manchu

The Return of Dr. Fu-Manchu

The Bride of Fu Manchu

The Library of Shadows