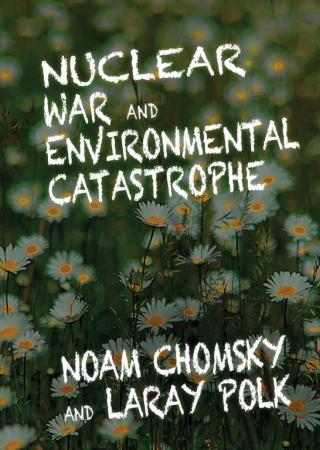 "There are two problems for our species' survival—nuclear war and environmental catastrophe," says Noam Chomsky in this new book on the two existential threats of our time and their points of intersection since World War II.
While a nuclear strike would require action, environmental catastrophe is partially defined by willful inaction in response to human-induced climate change. Denial of the facts is only half the equation. Other contributing factors include extreme techniques for the extraction of remaining carbon deposits, the elimination of agricultural land for bio-fuel, the construction of dams, and the destruction of forests that are crucial for carbon sequestration.
On the subject of current nuclear tensions, Chomsky revisits the long-established option of a nuclear-weapon-free zone (NWFZ) in the Middle East, a proposal set in motion through a joint Egyptian Iranian General Assembly resolution in 1974.
Intended as a warning, Nuclear War and Environmental Catastrophe is also a reminder that talking about the unspeakable can still be done with humor, with wit and indomitable spirit.