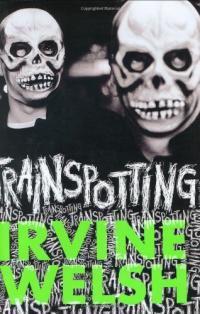 "The best book ever written by man or woman...deserves to sell more copies than the Bible."—*Rebel, Inc.*
Brace yourself, America, for Irvine Welsh's Trainspotting—the novel and the film that became the cult sensations of Britain. Trainspotting is the novel that first launched Irvine Welsh's spectacular career—an authentic, unrelenting, and strangely exhilarating episodic group portrait of blasted lives. It accomplished for its own time and place what Hubert Selby, Jr.'s Last Exit to Brooklyn did for his. Rents, Sick Boy, Mother Superior, Swanney, Spuds, and Seeker are as unforgettable a clutch of junkies, rude boys, and psychos as readers will ever encounter. Trainspotting was made into the 1996 cult film starring Ewan MacGregor and directed by Danny Boyle
(A Shallow Grave).

Amazon.com Review
Irvine Welsh's controversial first novel, set on the heroin-addicted fringe of working-class youth in Edinburgh, is yet another exploration of the dark side of Scottishness. The main character, Mark Renton, is at the center of a clique of nihilistic slacker junkies with no hopes and no possibilities, and only "mind-numbing and spirit-crushing" alternatives in the straight world they despise. This particular slice of humanity has nothing left but the blackest of humor and a sharpness of wit. American readers can use the glossary in the back to translate the slang and dialect--essential, since the dialogue makes the book. This is a bleak vision sung as musical comedy.

Review
Blisteringly funny ... don't abandon everything for the movie. It's worth making the effort with Trainspotting not merely because relatively few writers have rummaged through this particular enclave of British youth culture, but because even fewer have dug there so deeply. -- The New York Times Book Review, Mark JollyThe best book ever written by man or woman ...deserves to sell more copies than the Bible. -- Rebel, Inc.