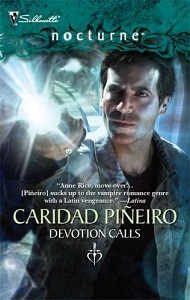 In Spanish Harlem, real danger comes in nonhuman form. A night stalker haunts the barrio, feeding its insatiable hunger, craving the humanity only healer Ricardo Fernandez can give him. For Ricardo is cursed with the ability to heal, and hurt, by touch--a talent he hides behind the practice of Santeria.
Sara Martinez knows there's no such thing as faith healing, until Ricardo's gifts become her last hope. And Ricardo's passion becomes something she can't live without.
But when the night stalker uses Sara as bait, Ricardo must choose between two evils: lose the woman he loves or lose himself to the darkness of his powers.

Running with the Pack [Anthology ed. by Ekaterina Sedia]