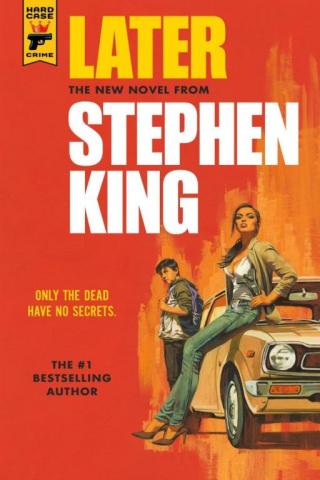 #1 bestselling author Stephen King returns with a brand-new novel about the secrets we keep buried and the cost of unearthing them.
SOMETIMES GROWING UP
MEANS FACING YOUR DEMONS
The son of a struggling single mother, Jamie Conklin just wants an ordinary childhood. But Jamie is no ordinary child. Born with an unnatural ability his mom urges him to keep secret, Jamie can see what no one else can see and learn what no one else can learn. But the cost of using this ability is higher than Jamie can imagine—as he discovers when an NYPD detective draws him into the pursuit of a killer who has threatened to strike from beyond the grave.
LATER is Stephen King at his finest, a terrifying and touching story of innocence lost and the trials that test our sense of right and wrong. With echoes of King’s classic novel It, LATER is a powerful, haunting, unforgettable exploration of what it takes to stand up to evil in all the faces it wears.
Review

“King’s writing in LATER is as clean, direct and evocative as it’s ever been… the crime-driven plot is propulsive [and] some of the lines just take your breath away… you’re in the hands of a master storyteller.”
—Washington Post

“Crave chills and thrills but don’t have time for a King epic? This will do the job before bedtime. Not that you’ll sleep.”
—Kirkus

“Gory and unnerving, this twisty chiller has sufficient sins and revelations to keep readers pursuing the action to its breathless conclusion. King fans are in for a treat.”
—Publishers Weekly

“An entertaining and breezy read, with the stellar storytelling that has justly made King a literary legend.”
—AARP Magazine

“A satisfying tale about facing demons—both those we can see and those that lurk in the darkness.”
—Foreword Reviews

About the Author
Stephen King has written dozens of bestselling books including The Shining, The Stand, and The Green Mile. Film adaptations of his work include “Misery” and “Stand By Me”. In 2003, King received the National Book Foundation Medal for Distinguished Contribution to American Letters, and in 2007 he was named a Grand Master by the Mystery Writers of America.

A Touch of Death

A Diet of Treacle