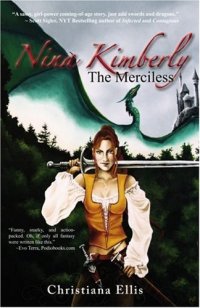 She's on a mission to kill the man who loves her.
Why?
Because he's an idiot.
Ten years ago, Nina Kimberly the Merciless was cheated out of the life of adventure that she truly deserves. Her father, the fearsome barbarian conqueror Marcus the Merciless, met his first and only defeat at the hands of, well... a gopher hole.

Nina Kimberly the Merciless is a comic fantasy novel about the teenage daughter of a fearsome barbarian conqueror, originally produced in 2006 as a free podcast audiobook. The podcast was an inaugeral nominee for the 2006 Parsec Award for Best Speculative Fiction Long Form and was also nominated for a Podcast Peer Award. In 2010, Foreword Magazine awarded Nina Kimberly the Merciless with the Bronze Award for Best Sci-Fi/Fantasy Novel of the year!
The podcast attracted an audience of more than 10,000 listeners, and as a result, is being released in print on May 15th, 2009 from Dragon Moon Press.