A bride by moonlight 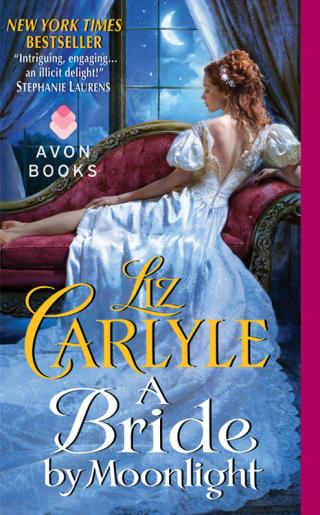 Passion and secrets simmer behind the elegant façade of Victorian London in another deliciously intriguing novel featuring the dangerous men of the mysterious St. James Society.

Royden Napier, Baron Saint-Bryce, is tall, dark, and ruthless—and on the hunt for a dangerous beauty . . .

On the eve of her escape to the Continent, bold, beautiful Lisette Colburne accepts a proposal she dare not refuse: masquerade as the future bride of the steely-eyed Royden Napier and help him solve his most dangerous case. Soon Lisette is in even greater danger—of losing her heart to the one man with the power to destroy her . . .

Estranged from his aristocratic family, the enigmatic Napier has forged a reputation as Scotland Yard's most relentless police commissioner. He's vowed to bring Lisette to justice—but with every forbidden kiss and every tantalizing touch, he finds himself becoming less convinced of her guilt . . . and more certain he must have her. But when danger touches Lisette, can he save her?

In love with a wicked man