Louder Than Words: The New Science of How the Mind Make Meaning 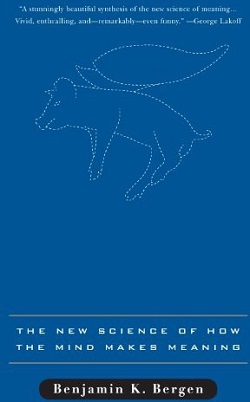 Whether it's brusque, convincing, fraught with emotion, or dripping with innuendo, language is fundamentally a tool for conveying meaning--for taking thoughts in the mind of one human being, and summoning similar thoughts in the mind of another. This is an amazing ability, one that is both uniquely and universally human. Yet the science of meaning has lagged behind the other cognitive sciences. That's because, as human behaviors go, meaning is comparatively hard to study scientifically. Meaning is internal, intimately personal, and almost entirely hidden. But methodological breakthroughs in the past decade have revolutionized the science of meaning. In "Louder Than Words," cognition expert Benjamin Bergen describes how cutting-edge techniques from experimental psychology and neuroscience have started to produce answers to the question of how we manage to convey meaning. Drawing from brain imaging research, behavioral experiments, and work with brain-damaged patients, Bergen proposes a new account of how meaning works. Namely, when we hear or read words and sentences, we engage parts of the brain that are used for perception and action to create internal, mental simulations of meaning. When you read that "the gorilla has hairy kneecaps," you can't help but activate parts of your vision system that re-enact what it would be like to see the hairy kneecaps on a gorilla. When you read "There's no way you can touch your elbow to your ear," you use parts of your motor system, which controls actions your body might perform, to run a mental simulation of what it would be like to try to touch your elbow you your ear. Simply put, the way we understand what other people are saying is by mentally recreating the scenes and events that we think they're describing. To the extent that our mental simulations match theirs (far from given!), we will succeed in understanding what they want to tell us. "Louder Than Words" will answer such questions as: - Why do people drive badly while talking on a cell phone? - How do we understand language about things we've never seen before, like flying pigs or Jabberwockies? - Why do we move our hands and arms when we speak? And do those gestures help people understand us? - Why is it that computers can beat a grandmaster at chess but can't process language as well as a five-year old? - Do people who speak different languages think differently? "Louder Than Words" is the first book to bring together linguistics, cognitive psychology, and neuroscience to tell the compelling new story of how meaning works. It is a rich account that will change how people read, write, speak, and listen.

Комментарии к книге "Louder Than Words: The New Science of How the Mind Make Meaning"