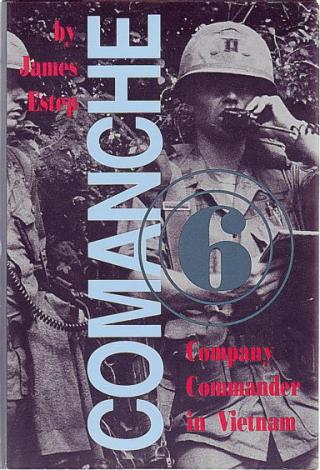 The young captain saw war as man’s ultimate competitive sport. It was this realization that brought James Estep back to Vietnam for a third tour — this time as a company commander in the famed 1st Cavalry Division. Call-sign “Comanche Six,” he commanded an airmobile rifle company. They were pawns in this game of war: picked up by helicopters and dropped off at an LZ in the heart of “Indian country,” with orders to launch search-and-destroy missions by day, and “trick or treat” patrols at night — to find the elusive “Charlie” and kill him.
Vietnam has been called the “company commander’s war” — these were the young officers who ran the war on a day-to-day basis, making life and death decisions in the jungles, rice paddies, and villages. Estep quickly learned what it meant to be a leader of men: to comfort an 18-year-old who had killed for the first time; to give confidence to an intimidated platoon leader; to revitalize the morale of a “hard-luck” company; to gain the trust of his crusty first sergeant; and, most of all, to confront and conquer his own fears.
Company Commander in Vietnam will stand as one of the fine memoirs of Vietnam; it is an honest and compelling story of American infantrymen caught up in a war that could not be won. But more than one man’s story, it is a revealing look at “the way of war” — how young boys become fighters and leaders, what they give, what they gain — and lose — in the end.