The Me 262 Stormbird: From the Pilots Who Flew, Fought, and Survived It 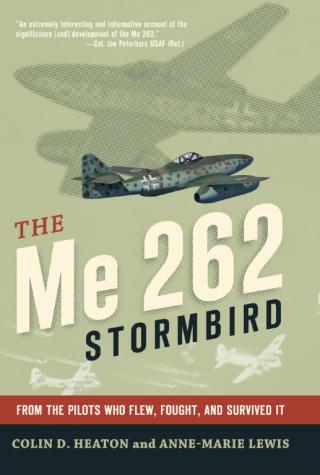 The Me 262 was the first of its kind, the first jet-powered aircraft. Although conceived before the war, with the initial plans being drawn in April 1939, the Stormbird was beset with technological (particularly the revolutionary engines) and political difficulties, resulting in it not entering combat until August 1944, with claims of nineteen downed Allied aircraft. The performance of the Me 262 so far exceeded that of Allied aircraft that on 1 Sepember 1944, USAAF General Carl Spaatz remarked that if greater numbers of German jets appeared, they could inflict losses heavy enough to force cancellation of the Allied daylight bombing offensive.
The story of how the Stormbird came to be is fascinating history, and it comes to life in the hands of noted historian Colin Heaton. Told largely in the words of the German aces who flew it, The Me 262 Stormbird provides the complete history of this remarkable airplane from the drawing boards to combat in the skies over the Third Reich. Features two forewords, one by Jorg Czypionka, Me 262 night fighter pilot, and another by historian and author Barrett Tillman.
Review

“…as operational history, the book is both informative and strongly recommended.”
- Air Power History

“This is both an intensely factual book about the famed Messerschmitt and a love story. The love story comes in from the authors' obvious fascination with the short-lived Stormbird… Even if you're an Me-262 expert, you're certain to find much that is new here. It's particularly interesting to read how various German pilots learned to use it in combat… If all this sounds intriguing, this is certainly the book for you.”
- Aviation History

From the Inside Flap
The introduction of the Me 262 Stormbird jet fighter was a potential game changer for the Germans in World War II, but production delays and a shortage of pilots minimized its impact on the war. Nevertheless, jet engines were the way of the future, and the Stormbird loomed large in the experiences of the World War II pilots who flew and fought the first jet fighter.
In The Me 262 Stormbird, Colin D. Heaton (The German Aces Speak) covers the iconic fighter in detail, often in the words of the men who flew it or fought it. From Willi Messerschmitt’s original designs, through the early technical difficulties and flight tests, and eventual introduction of the aircraft into the war, Heaton covers the Stormbird’s history in detail alongside fascinating anecdotes from many of Germany’s top aces—and the Allied airmen who went head to head with the futuristic jet while flying their prop-driven planes.
Heaton also covers the political machinations involved in getting approval for the jet—Hitler was personally involved—as well as the infighting among the Luftwaffe’s senior officers, some of whom wanted the aircraft designed as a fighter and others who wanted it designed as a bomber.
The first Me 262 squadron, ultimately designated as JG-7, and Adolf Galland’s squadron, JV-44, are covered extensively, along with the two-seater Me 262 night fighter. Heaton rounds out his narrative with the American perspective of Allied airmen who faced the 262, as well as an analysis of the Stormbird program and its post-war impact. The Me 262 Stormbird is a definitive account of this state-of-the-art aircraft.

Комментарии к книге "The Me 262 Stormbird: From the Pilots Who Flew, Fought, and Survived It"