Shoot Him On Sight 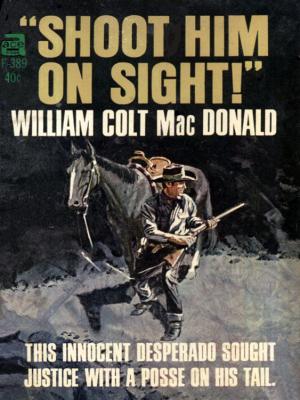 John Cardinal - gray eyes, red hair, six foot tall, 175 pounds.... and "vicious with a fast gun!"
One Thousand Dollars Reward! For the cold-blooded murder of a U.S. Marshal! For bank-robbery! Cattle-rustling! Stagecoach holdup! Horse-thieving! And for every other kind of skulduggery known!
But for John Cardinal himself, there was one terrible irony - he was innocent of all of those things, but determined to follow a fugitive's trail to a showdown with the false law of a passel of pistol-toting pursuers.