Homer: The Ninth Life Of A Blind Wonder Cat 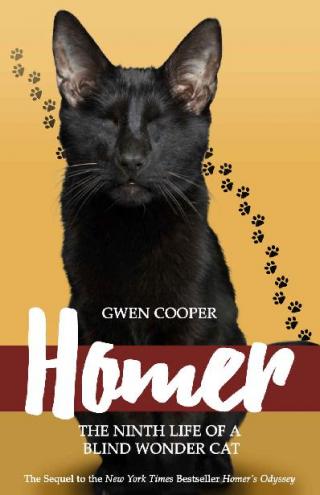 The odds had always been
stacked against Homer, the
blind kitten nobody wanted. But
destiny took a hand the day he
met Gwen Cooper, and with the
publication twelve years later of the international bestseller
"Homer’s Odyssey," Homer went
from beloved house cat to
world-wide star. He became the
scourge and darling of the
reporters, photographers, videographers, bloggers, and
radio hosts who clamored to
meet him—dragging his hapless
human behind him as he
greeted fame with his usual joie
de vivre and occasional “catitude.” He became a spokes-
cat for the cause of special-
needs animals everywhere, and
eventually the wise older
mentor to the new special-
needs kitten who would enter his and Gwen’s lives. Most
importantly, Homer taught
those who loved him best how
to live and die with courage and
joy—and left behind a rescue
community of “Homer’s Heroes” that continues to save countless
lives in his name.
By turns humorous and tender,
this beautifully written, 115-
page sequel concludes the
adventures of Homer the Blind Wonder Cat—the fearless feline
who proved that love isn’t
something you see with your
eyes, that even the smallest of
creatures can make a big
difference, and that true love lives forever.

THEM!: A Story In Five Parts

Homer And The Holiday Miracle