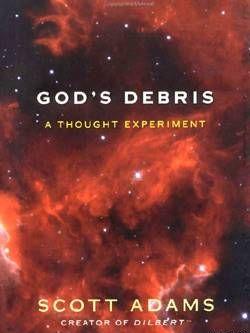 Andrews McMeel Publishing and Scott Adams, creator of the Dilbert comic strips and #1 best-selling author of Dilbert humor books, have agreed to publish Mr. Adams' new project called God's Debris: A Thought Experiment. God's Debris is Scott's first non-Dilbert, non-humor effort. The author describes the book as "a thought experiment wrapped in a story. It's designed to make your brain spin around inside your skull." Some content of the book is nonfiction because the opinions and philosophies of the characters might have lasting impact on the reader. Others believe it is fiction because the characters don't exist.

Imagine that you meet a very old man who - you eventually realize - knows literally everything. Imagine that he explains for you the great mysteries of life: quantum physics, evolution, God, gravity, light, psychic phenomenon, and probability -- in a way so simple, so novel and so compelling that it all fits together and makes perfect sense. What does it feel like to suddenly understand everything? God's Debris isn't the final answer to the Big Questions. But it might be the most compelling vision of reality you will ever read. The thought experiment is this: Try to figure out what's wrong with the old man's explanation of reality. Share the book with your smart friends then discuss it later while enjoying a beverage.

The book was initially offered to the public as an e-book, and the book has since become the #1 best-selling e-book on the planet. Because of the e-book offering, the Internet is buzzing with comments from the book's fans.