A Universe From Nothing: Why There Is Something Rather Than Nothing 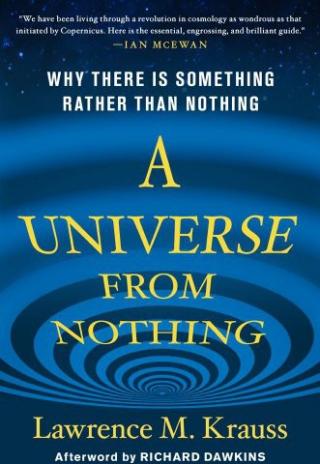 Internationally known theoretical physicist and bestselling author Lawrence Krauss offers provocative, revelatory answers to the most basic philosophical questions: Where did our universe come from? Why is there something rather than nothing? And how is it all going to end? Why is there something rather than nothing?” is asked of anyone who says there is no God. Yet this is not so much a philosophical or religious question as it is a question about the natural world—and until now there has not been a satisfying scientific answer. Today, exciting scientific advances provide new insight into this cosmological mystery: Not only can something arise from nothing, something will always arise from nothing. With his wonderfully clear arguments and wry humor, pioneering physicist Lawrence Krauss explains how in this fascinating antidote to outmoded philosophical and religious thinking. As he puts it in his entertaining video of the same title, which has received over 675,000 hits, “Forget Jesus. The stars died so you could be born.” A mind-bending trip back to the beginning of the beginning, A Universe from Nothing authoritatively presents the most recent evidence that explains how our universe evolved—and the implications for how it’s going to end. It will provoke, challenge, and delight readers to look at the most basic underpinnings of existence in a whole new way. And this knowledge that our universe will be quite different in the future from today has profound implications and directly affects how we live in the present. As Richard Dawkins has described it: This could potentially be the most important scientific book with implications for atheism since Darwin.

Hiding in the Mirror: The Quest for Alternate Realities, from Plato to String Theory

Fear of Physics: A Guide for the Perplexed

The Greatest Story Ever Told--So Far: Why Are We Here?

Комментарии к книге "A Universe From Nothing: Why There Is Something Rather Than Nothing"