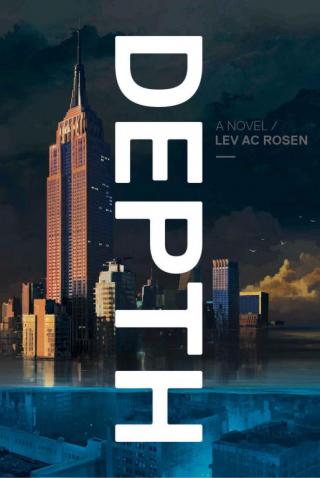 In a post-apocalyptic flooded New York City, a private investigator’s routine surveillance case leads to a treasure everyone wants to find—and someone is willing to kill for.
Depth combines hardboiled mystery and dystopian science fiction in a future where the rising ocean levels have left New York twenty-one stories under water and cut off from the rest of the United States. But the city survives, and Simone Pierce is one of its best private investigators. Her latest case, running surveillance on a potentially unfaithful husband, was supposed to be easy. Then her target is murdered, and the search for his killer points Simone towards a secret from the past that can’t possibly be real—but that won’t stop the city’s most powerful men and women from trying to acquire it for themselves, with Simone caught in the middle.
Review

About the Author
Lev AC Rosen is the author of the critically acclaimed All Men Of Genius (Tor, 2011), which was an Amazon Best of the Month, on over a dozen best of the year lists, and has been nominated for multiple awards. Locus Magazine described it as “mixing genres with fearless panache.” His work has been featured in Esopus Magazine and on various blogs including Tor.com. He lives in Manhattan.