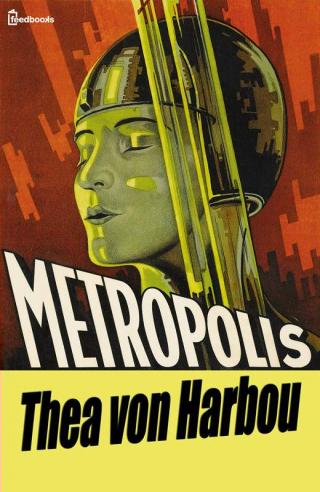 Fritz Lang's Metropolis is one of the best-known and controversial of the German silent films. Lang's wife, Thea von Harbou, wrote both the screenplay for the movie, and more or less simultaneously, this "novelization".
The basic plot of both film and novel is this: a high-technology city, Metropolis, built and owned by Joh Fredersen, is divided between the rich oligarchs living in the high towers and the exploited workers living under the ground level. Fredersen's only son, Freder, falls in love with a working class girl named Maria, who turns out to be the leader of a clandestine, semi-religious worker's movement, which awaits the coming of a "Mediator" to improve their position. Freder, after switching places with a worker named Georgi (but known officially as 11811) decides to take on the job of "Mediator", but is discovered by his father and the villainous inventor Rotwang. Rotwang creates a kind of android with the form of Maria, and kidnaps the real Maria. The robot replacement turns the movement violent, and Metropolis is virtually destroyed in the resulting fighting, until Freder and Maria, reunited, manage to get control and reconcile the workers with Freder's father.
Lesson: "The Mediator between Head and Hands is the Heart."