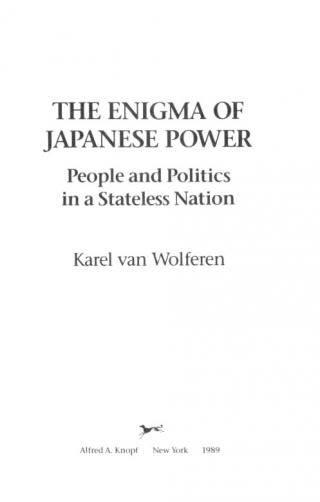 A NOTE ABOUT THE AUTHOR
Karel van Wolferen left Netherlands at the age of eighteen and has lived in Japan for most of the past twenty-five years. For some fifteen years he has been East Asia correspondent for the Dutch newspaper NRC Handelsblad, covering several countries, from India to Korea. In 1987 he received the highest Dutch award for journalism for his coverage of the Philippine revolution. He writes on Japan aided by a vast amount of personal knowledge, gained through teaching and involvement in business activities before he became a full-time journalist. His great interest in political theory has resulted in articles for scholarly magazines such as Foreign Affairs, and a study of student revolutionaries of the sixties. The Enigma of Japanese Power was written between September 1986 and March 1988 in a cabin in the mountains of northern Ibaragi, about three hours from Tokyo.

I am grateful to a large number of people who have directly and indirectly helped me to write this book. Some must remain unmentioned, such as the hundreds whom I have interviewed over some two decades concerning a great variety of Japanese subjects.

Among those who were more closely involved with the book, three friends stand out. Without the assistance of Yoshino Okubo, who scoured libraries and prepared Japanese language material, it would have been a different book. William Wetherall and Ivan Hall supplied running comments and many invaluable editorial suggestions while going through various drafts of the manuscript. No less important was their unceasing moral support during times when I appeared to make little progress. I count myself extremely lucky to be their friend.

I am intellectually indebted to Chalmers Johnson for daring me to bring into explicit focus some aspects of my subject that I had theretofore thought of as having only marginal significance. Aside from this I thank him for his friendship and unrelenting encouragement over many years. Equal thanks to Sheila Johnson for her patient perusal of the early drafts of most of the chapters, and her innumerable editorial suggestions.

Thanks to Milos Sovak for his many helpful suggestions and enthusiasm. Jan van Rij, Edward Seidensticker, Ishida Takeshi, Gordon Berger, Stanislav Andreski, Harvey Stockwin, Robert Cutts and Eric Klestadt read parts of the manuscript and I want to thank them for their ideas and welcome criticism. Ian Buruma belongs in this list also, and is among those at the top of the list of people whose conversation over the years has stimulated my mind. I want to thank Professor Mikuriya Takashi for his help and Professor Ito Daiichi for his comments. I owe Clyde Frestowitz and Sheldon Garon for sending me the galley proofs of their important books.

There are those people whose sometimes off-hand remarks germinate in one’s mind to become major ideas. I have met several over the years in Japan, but I want to mention two friends, Murray Sayle and Claus Regge, and thank them for giving me, probably without realising it, the initial ideas for several of the observations in this book.

A special thank-you is due to George De Vos who, more than twenty years ago, first urged me to write about Japan. This book is probably very different from what he had in mind then, but he gave me a lot of confidence.

I am grateful to Frits Bolkestein and Wim Kortekaas for their faith in my project, their help and friendship. The staff of the Foreign Correspondents’ Club library in Tokyo was, as always, efficient and helpful.

Michael Grey put together the word-processing equipment on which this book was written; he made it run faster and came out to my mountain cabin to make emergency repairs. I could not, incidentally, have finished it in the available time without the superior XyWrite program.

It is hardly possible to thank William Miller enough for being a superb agent as well as a good friend, and for giving his unwavering support before I could begin and in times of crisis.

Wout Woltz and Jan Sampiemon, editors of NRC Handelsblad, are the best employers one could wish for. They not only help maintain this newspaper as one of the greatest in the world, providing me over the years with a maximum opportunity for comprehensive analyses, but also accommodated me with fraternal tolerance when my leave of absence grew longer and longer.

Last but not least, my warm thanks go out to Fusae Wako for faithfully maintaining the main logistical channel between Tokyo and Morigane in the foothills of Northern Ibaragi, during the eighteen months of isolation that it took to write this book, and for her loyal support for a long time before that.

It goes without saying that none of those mentioned are responsible for the conclusions or possible errors in this book.

With the listing of Japanese names I have followed the convention of family name first.