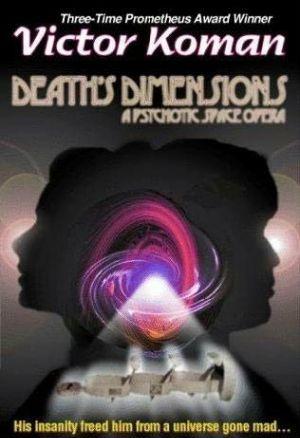 Victor Koman, three-time Prometheus Award-winning author of Kings of the High Frontier, finally releases his long-suppressed first novel. Based on his Galaxy Magazine short story, Death's Dimensions tells the tale of a stunningly unusual and startlingly original hero worthy of the New Wave novels of Norman Spinrad or Robert Silverberg.His death wish exceeded that of any other mortal. Only his lust for oblivion gave him the strength to survive the Valliardi Transfer, the key to the Universe.He was Virgil Grissom Kinney, and he was insane beyond hope.Caged and bound in a madhouse she found him. She rescued him, reprogrammed him, forged him into a test pilot, then abandoned him to the trackless stars.She was Delia Trine, his angel of Death.She filled him with the memories of a man already dead. When that man lived again inside Virgil, she tried to shatter their souls, to possess both her dead lover and her lover of death. But the dead man inside Virgil would stop at nothing for a chance to live again.The Universe was their ballroom, madness their song, and death the dance they danced.