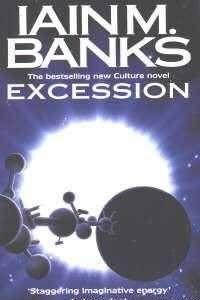 Two and a half millennia ago, the artifact appeared in a remote corner of space, beside a trillion-year old dying sun from a different univese. It was a perfect black-body sphere, and it did nothing. Then it disappeared. Now it is back.

Silent, motionless, and resisting all efforts to make contact, the artifact waits. The Culture ships, however, cannot. For the artifact is something they need to understand first, before it falls into less understanding hands — and triggers a political and military crisis which will threaten everything the Culture has achieved.

One person who saw the artifact when it first appeared may have information concerning its purpose, but she is living out her death in the immense Eccentric ship, the Sleeper Service. The Culture ships formulate a plan to retrieve her. The Sleeper Service has other things on its mind.

A novel of extraordinary imagination, richness and energy, Excession is Iain M. Banks at his magnificent best.

A Song Of Stone