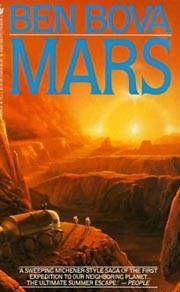 Jamie Waterman, a Native American geologist, is chosen at the last minute for the first manned exploration of the planet Mars. On touchdown, he is so overwhelmed with the emotion of the moment that he utters a Navajo phrase instead of the political statement he is supposed to read. This sets off a chain reaction among the leaders and politicians on Earth. Thus starts Bova’s sprawling space opera. The expedition, seen from Jamie’s point of view, is really the protagonist here. The story is filled with lots of characters of different nationalities and there’s plenty of political intrigue. Of course, there are obstacles to overcome: a meteor almost destroys the lab, the doctor neglects his duty and nearly kills them all, crew members come down with mysterious “Martian flu,” and through it all is the never-ending search for evidence of life on this planet. Bova has done extensive research and his descriptions of Mars and the conditions under which the study is conducted are very plausible. All in all, a satisfying story.

The novel is a part of currently 17-volume series “Grand Tour” that presents the theme of exploration and colonization of the Solar System by humans. Written in 1992 “Mars”, according to the internal in-universe chronology, stands 4th in the series and is immediately continued by “Return to Mars” published in 1999 which stands 7th. Events depicted in “Moonrise” (1996) and “Moonwar” (1998) take place between those of “Mars” and “Return to Mars” and are loosely related to them.

To Save the Sun