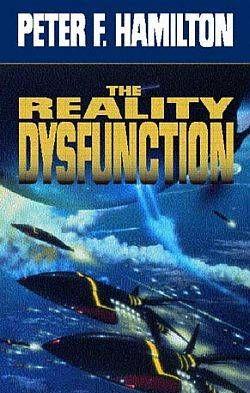 In AD2600 the human race is finally beginning to realise its full potential. Hundreds of colonised planets scattered across the galaxy host a multitude of prosperous and wildly diverse cultures. Genetic engineering has pushed evolution far beyond nature's boundaries, defeating disease and producing extraordinary spaceborn creatures. Huge fleets of sentient trader starships thrive on the wealth created by the industrialisation of entire star systems. And thoughout inhabited space the Confederation Navy keeps the peace. A true golden age is within our grasp.

But now something has gone catastrophically wrong. On a primitive coloney planet a renegade criminal's chance encounter with an utterly alien entity unleashes the most primal of all our fears. An extinct race which inhabited the galaxy aeons ago called it 'The Reality Dysfunction'. It is the nightmare which has prowled beside us since the beginning of history.

This is space opera on an epic scale, with dozens of characters, hundreds of planets, universe-spanning plots, and settings that range from wooden huts and muddy villages to sentient starships and newborn suns. It's also the first part of a two-volume book that is itself the first book of a series. There's no question that there's a lot going on here (too much to even begin to detail the plot), but Hamilton handles it all with an ease reminiscent of E. E. "Doc" Smith. The best way to describe it: it's big, it's good, and luckily there's plenty more on the way.