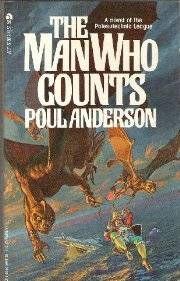 When three Terrans — a space pilot, a planetary queen and an obese tycoon — crash-landed on Diomedes, they realized that the chances for survival were quite slim. The native food was totally poisonous to humans, and the survivors had only six weeks’ worth of supplies to get them across thousands of miles of unmapped territory to the one Terran outpost. Their only hope was to enlist the aid of the winged inhabitants of Diomedes, and these barbarian tribes cared only for battle and glory. There was little that could induce them to worry about the lives of three humans.

The Man Who Counts [≈War of the Wing-Men]