The Pirates of Zan 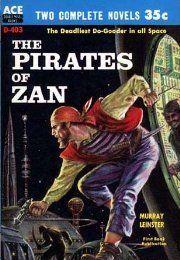 Because Bron Hoddan was a serious electronics engineer, he didn’t want any part of his particular planetary heritage. For he was from Zan - and Zan’s only occupation was space-ship piracy!. So Bron went to Walden, the most civilized planet of them all. His first step to making himself a good reputation was to invent a machine that would save the government millions. But when instead he was seized and jailed as the most unspeakable criminal in Walden’s history, he realized that there was only one way open to remedy this “civilized” disaster. And that was by putting into use some of Zan’s old-fashioned buccaneering techniques!

First serialized as The Pirates of Ersatz in Astounding Science Fiction in February– April 1959.

Nominated for Hugo Award for Best Novel in 1960.