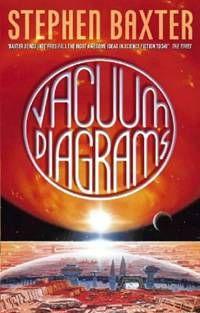 Ironically, you’ll probably appreciate Vacuum Diagrams most after you’ve put it down. The prolific and acclaimed Stephen Baxter has always been praised for his imaginative and conscientious use of science, and Vacuum Diagrams is no exception. This collection of short stories will leave you ruminating for days over the sprawl of ideas, worlds, and life forms Baxter has woven together.

Filling in the gaps on Baxter’s ambitious, almost audacious, 10-million-year timeline called the “Xeelee Sequence,” Vacuum Diagrams is a collection of revised, previously published short stories that bridges together his popular novels set in this same “future history” — Raft, Timelike Infinity, Flux, and Ring. Baxter’s universe is rotten with life, from strange tree-stump-like creatures with superfluid ice skeletons to dark matter “birds” to sentient beings composed of pure mathematics. And Baxter’s reverence for life’s beauty, for its voracious robustness, is hard to resist — especially when it comes to humanity and its tentative, eager rise. The cycling timeline follows humans as they come into their own as a star-faring race, from their first sporadic steps to their near dominance of the universe and beyond.

Vacuum Diagrams is a great introduction to Baxter for those unfamiliar with him and a good primer for the other “Xeelee Sequence” novels. If you already love Baxter or the other novels in the sequence, Vacuum Diagrams is certainly a safe bet. Besides, any book that sends you scurrying quizzically after your college physics text deserves a closer look. Check it out.