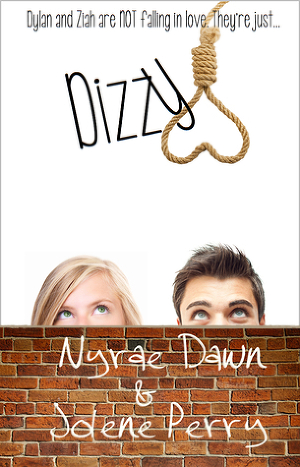 Dylan doesn’t do relationships. He and his older brother watched their dad go through hell and back, so they made a pact years ago—no girl would come between the Gibson boys. But his brother sells out. He's getting married anyway. To the sister of a chick Dylan met at a party, who's probably the angriest girl he's ever met. Unfortunately, she happens to be hot, too.

Ziah’s life is upside down—her safe boyfriend turns out to be not-so-safe, and now her sister is getting married before college is over to the older brother of a spoiled, party boy who drives her crazy. And also makes her heart beat too fast.

There’s no denying the attraction, but there's also no denying how much they irritate each other. When they’re thrown together as forced wedding planners, they find an ally in each other--neither wants this wedding to happen.

But instead of putting a stop to the crazy nuptials they find themselves at fittings and cake testing. And maybe even…a few dates?
Dizzy is a novel about what happens when two people who are determined not to fall in love, maybe do anyway. Maybe.

This Is So Not Happening

This Is How I Disappear (СИ)