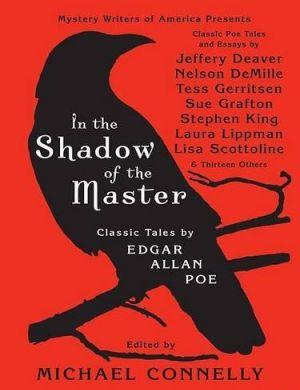 This anthology was edited by Michael Connelly. His essay is called "Once Upon a Midnight Dreary."

Few have crafted stories as haunting as those by Edgar Allan Poe. Collected here to commemorate the 200th anniversary of Poe's birth are sixteen of his best tales accompanied by twenty essays from beloved authors, including T. Jefferson Parker, Lawrence Block, Sara Paretsky, and Joseph Wambaugh, among others, on how Poe has changed their life and work.

Michael Connelly recounts the inspiration he drew from Poe's poetry while researching one of his books. Stephen King reflects on Poe's insight into humanity's dark side in "The Genius of 'The Tell-Tale Heart.'" Jan Burke recalls her childhood terror during late-night reading sessions. Tess Gerritsen, Nelson DeMille, and others remember the classic B-movie adaptations of Poe's tales. And in "The Thief," Laurie R. King complains about how Poe stole all the good ideas… or maybe he just thought of them first.

Powerful and timeless, In the Shadow of the Master is a celebration of one of the greatest literary minds of all time.

The Mystery Writers of America, founded in 1945, is the foremost organization for mystery writers and other professionals dedicated to the field of crime writing.

Running From The Law

Комментарии к книге "In The Shadow Of The Master: Classic Tales by Edgar Allan Poe"