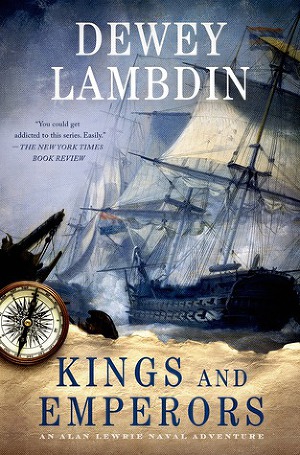 In Kings and Emperors, the twenty-first book in Dewey Lambdin's beloved Alan Lewrie series, Captain Alan Lewrie, Royal Navy, is still in Gibraltar, his schemes for raids along the coast of southern Spain shot to a halt. He is reduced to commanding a clutch of harbor defense gunboats in the bay while his ship, HMS Sapphire, slowly grounds herself on a reef of beef bones! Until Napoleon Bonaparte’s invasion of peaceful Portugal and his so-called collaborative march into Spain change everything, freeingSapphire to roam against the King’s enemies once more!

As kings are overthrown and popular uprisings break out all across Spain, Lewrie’s right back in the action, ferrying weapons to arm Spanish patriots, scouting within close gun range of the impregnable fort of Ceuta, escorting the advance units of British expeditionary armies to aid the Spanish, and even going ashore to witness the first battles between Sir Arthur Wellesley, later the Duke of Wellington, and Napoleon’s best Marshals, as the long Peninsular War that broke Imperial France begins to unfol