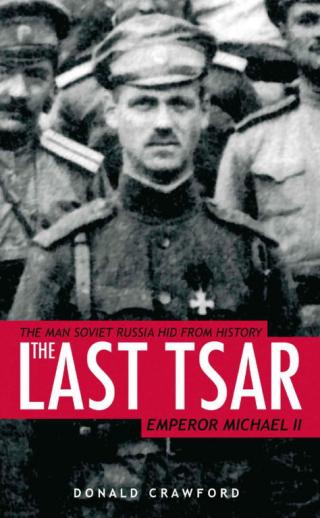 An historical biography of the last Tsar of Russia — not Nicholas II, but his brother Michael — Emperor Michael II — who succeeded to the throne when Nicholas abdicated in March 1917. Michael, married to a double divorcée, Natasha, the daughter of a Moscow lawyer, was the first Romanov murdered by the Bolsheviks, five weeks before the other mass killings, and because he was the Romanov who posed the greatest threat to them. However, they never admitted responsibility for his murder, pretending instead that he had escaped.
This book, based chiefly on original contemporary sources in Russia, tells you what the Soviet Union intended that you should never know. Does that matter now? Very much so, for unlike his brother Nicholas, Michael can serve as the bridge between today’s Russia and Tsarist Russia, a gap which has yet to be closed. As Viktor Yevtukhov, appointed deputy Russian Minister of Justice in February 2011, has said: ‘We should know more about this man and remember him, because this memory can give our society the ethical foundation we need’.
This book will tell you why, after almost a century, that should be so. From the tragedy of the past, a hope for the future…
www.lasttsar.com