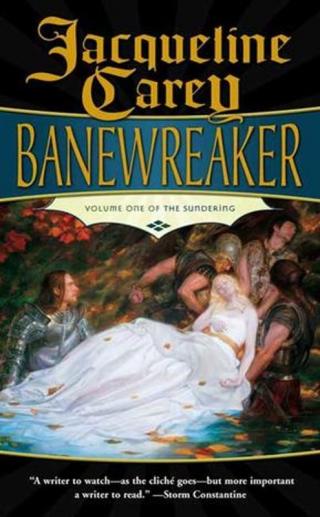 If all that is good thinks you evil… are you?
Once upon a time, the Seven Shapers dwelled in accord and Shaped the world to
their will. But Satoris, the youngest among them, was deemed too generous in
his gifts to the race of Men, and so began the Shapers' War, which Sundered
the world. Now six of the Shapers lay to one end of a vast ocean, and Satoris
to the other, reviled by even the race of Men.
Satoris sits in his Darkhaven, surrounded by his allies. Chief among them is
Tanaros Blacksword, immortal Commander General of his army. Once a mortal man
who was betrayed by King and Wife, Tanaros fled to Darkhaven a thousand years
ago, and in Satoris’s service has redeemed his honor-but left his humanity
behind.
Now there is a new prophecy that tells of Satoris’s destruction and the
redemption of the world. To thwart it, Satoris sends Tanaros to capture the
Lady of the Ellylon, the beautiful Cerelinde, to prevent her alliance with the
last High King of Men.
But Tanaros discovers that not all of his heart has been lost — his feelings
for Cerelinde could doom Satoris, but save the race of Men…