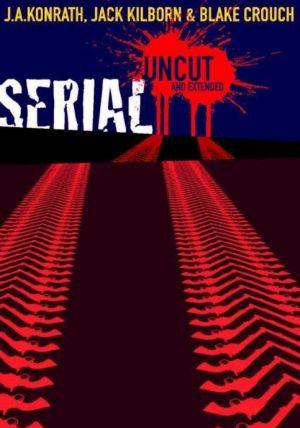 The original version of SERIAL, still available as a free ebook, was a 7500 word horror short story done as an experiment.

#1: Don’t go hitchhiking, because the driver who picks you up could be certifiably crazy.

#2: Don’t pick up hitchhikers, because the traveler you pick up could be certifiably crazy.

So what if, on some dark, isolated road, Crazy #1 offered a ride to Crazy #2?

When Blake Crouch (DESERT PLACES, ABANDON) and Jack Kilborn (AFRAID, CHERRY BOMB), face-off, the result is SERIAL, a terrifying tale of hitchhiking gone terribly wrong. Like a deeply twisted version of an “After School Special,” SERIAL is the single most persuasive public service announcement on the hazards of free car rides.

Beyond a thrilling piece of horrifying suspense, SERIAL is also a groundbreaking experiment in literary collaboration. Kilborn wrote the first part. Crouch wrote the second. And they wrote the third together over email in 100-word exchanges, not aware of each other’s opening section. All bets were off, and may the best psychopath win.

F. Paul Wilson says, “SERIAL reads just like a Crouch or Kilborn novel: Full speed ahead, no flinching, no blinking, no brakes.”

In less than a year, SERIAL has been downloaded over 200,000 times, and has received over a hundred negative reviews, with many people claiming it is the most depraved, awful thing they've ever read.

SERIAL UNCUT is newly expanded, now more than 36,000 words. Along with the reinsertion of additional material cut from the original version, it also has a vastly expanded beginning and ending, including an extended section that originally appeared in the novella TRUCK STOP by J.A. Konrath.

If you can handle horrific thrills, proceed at your own risk.

But if you suffer from anxiety attacks, nervous disorders, insomnia, nightmares or night terrors, heart palpitations, stomach problems, or are of an overly sensitive nature, you should read something else instead.

You have been warned…

The Pain of Others