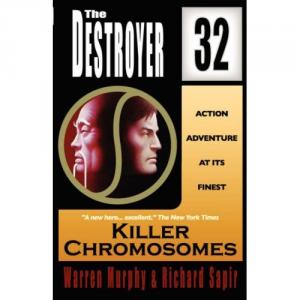 What happens when an insane female scientist discovers a genetic link between species - and experiments on herself? She transforms into a tiger - the man-eating kind. Wild, beautiful and deadly, Dr. Sheila Feinberg tests her new savage nature and leaves a trail of mangled male corpses behind. Insatiable, she stalks the only man worthy of her hunger for power, Remo Williams, the Destroyer. Ordered to stop the menace, Remo becomes both hunter and bait for this she-devil and winds up her prisoner, the stud she needs to create a new race. As Remo fights her bloodlust, master assassin Chiun circles in for the final kill to end the threat to humankind!