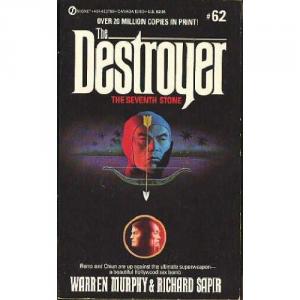 The deadliest stone of all
A bigger chill than snow. Harder to kick than heroin.
The Destroyer was stoned on star lust. Remo was losing it...and loving it...in the highly-trained arms of Kim Kiley, Hollywood sex specialist...and the hottest weapon in the Wo family arsenal.
Okay, the House of Wo was steamed. But two thousand years was a long time to hold a grudge against the Destroyer. The Wos were like that, though. Give those guys a revenge motive, and it was carved in stone. The family stone. Where Prince Wo the Nearly Great had preprogrammed the Destroyer to self-destruct...unless Chiun could get his mind off sex and back onto violence where it belonged...

The City and The City