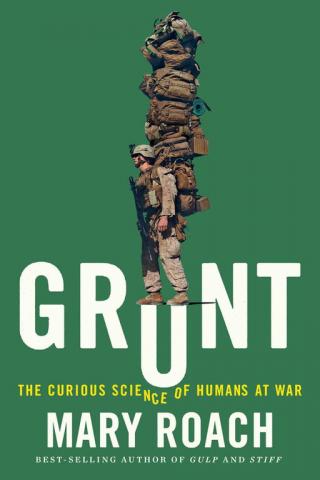 Best-selling author Mary Roach explores the science of keeping human beings intact, awake, sane, uninfected, and uninfested in the bizarre and extreme circumstances of war.
Grunt tackles the science behind some of a soldier’s most challenging adversaries—panic, exhaustion, heat, noise—and introduces us to the scientists who seek to conquer them. Mary Roach dodges hostile fire with the U.S. Marine Corps Paintball Team as part of a study on hearing loss and survivability in combat. She visits the fashion design studio of U.S. Army Natick Labs and learns why a zipper is a problem for a sniper. She visits a repurposed movie studio where amputee actors help prepare Marine Corps medics for the shock and gore of combat wounds. At Camp Lemmonier, Djibouti, in east Africa, we learn how diarrhea can be a threat to national security. Roach samples caffeinated meat, sniffs an archival sample of a World War II stink bomb, and stays up all night with the crew tending the missiles on the nuclear submarine USS Tennessee. She answers questions not found in any other book on the military: Why is DARPA interested in ducks? How is a wedding gown like a bomb suit? Why are shrimp more dangerous to sailors than sharks? Take a tour of duty with Roach, and you’ll never see our nation’s defenders in the same way again.
Amazon.com Review
An Amazon Best Book of June 2016:

It takes a special kind of writer to make topics ranging from death to our gastrointestinal tract interesting (sometimes hilariously so), and pop science writer Mary Roach is always up to the task. In her latest book, Grunt, she explores how our soldiers combat their non-gun-wielding opponents—panic, heat exhaustion, the runs, and more. It will give you a new appreciation not only for our men and women in uniform (and by the way, one of the innumerable things you’ll learn is how and why they choose the fabric for those uniforms), but for the unsung scientist-soldiers tasked with coming up with ways to keep the “grunts” alive and well. If you are at all familiar with Roach’s oeuvre, you know her enthusiasm for her subjects is palpable and infectious. This latest offering is no exception.
—Erin Kodicek, The Amazon Book Review

“A mirthful, informative peek behind the curtain of military science.” (Washington Post)
“From the ever-illuminating author of Bonk and Stiff comes an examination of the science behind war. Even the tiniest minutiae count on the battlefield, and Roach leads us through her discoveries in her inimitable style.” (Elle)
“Mary Roach is one of the best in the business of science writing… She takes readers on a tour of the scientists who attempt to conquer the panic, exhaustion, heat, and noise that plague modern soldiers.” (Brooklyn Magazine)
“Extremely likable … and quick with a quip…. [Roach’s] skill is to draw out the good humor and honesty of both the subjects and practitioners of these white arts among the dark arts of war.” (San Francisco Chronicle)
“Nobody does weird science quite like [Roach], and this time, she takes on war. Though all her books look at the human body in extreme situations (sex! space! death!), this isn’t simply a blood-drenched affair. Instead, Roach looks at the unexpected things that take place behind the scenes.” (Wired)
“Brilliant.” (Science)
“Roach … applies her tenacious reporting and quirky point of view to efforts by scientists to conquer some of the soldier’s worst enemies.” (Seattle Times)
“Covering these topics and more, Roach has done a fascinating job of portraying unexpected, creative sides of military science.” (New York Post)
“Having investigated sex, death, and preparing for space travel, New York Times best-selling Roach applies her thorough—and thoroughly entertaining—techniques to the sobering subject of keeping soldiers not just alive but alert and healthy of mind and body during warfare.” (Library Journal)
“A rare literary bird, a best selling science writer … Roach avidly and impishly infiltrates the world of military science…. Roach is exuberantly and imaginatively informative and irreverently funny, but she is also in awe of the accomplished and committed military people she meets.” (Booklist (starred review))

Gulp: Adventures on the Alimentary Canal