Blue Water, Green Skipper: A Memoir of Sailing Alone Across the Atlantic 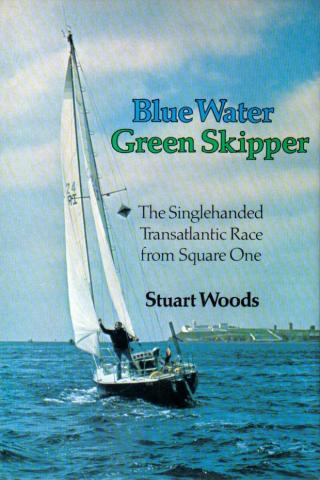 Here is a refreshingly different sort of yachting book — not the memoirs of some super-tough global adventurer or seawise master mariner, but an account of how one of the most demanding of all sea voyages, the Observer Singlehanded Transatlantic Race, was taken on by a yachtsman who was starting virtually from scratch. Eighteen months before the start of the race, Stuart Woods was nearly thirty-seven (“approaching my prime, really”), overweight (“not actually fat, mind you, just a bit heavy”), and not very fit (“It has always been my belief that strenuous exercise destroys the tissues”). He had never held a sextant or sailed a yacht single-handed. The only boat he had ever owned was an eleven-foot plywood dinghy (“At the Mirror Nationals we came twenty-ninth out of sixty boats. It was my finest hour”). This is his entertaining account of how he learned to sail; how he absorbed enough navigation, learned enough seamanship, and acquired enough practical experience to convince a demanding Race Committee that he was not mad or a fool; how he chose his designer, his yacht, and his boatyard; and. finally, how he fared in the Big Race. This book should not be missed by any yachtsman who is struggling to raise enough courage to leave harbor, by any dinghy sailor who aspires to bigger things; or by anybody who has ever stood on a shore, watched a sailboat go by, and wondered what it’s all about.