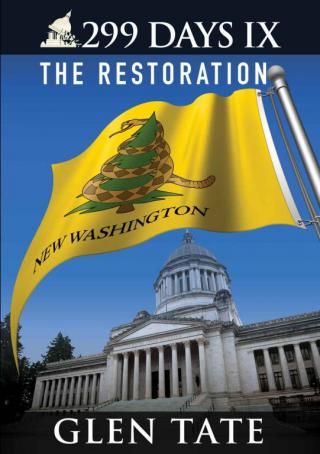 This ten-book series follows Grant Matson and others as they navigate through a partial collapse of society. Set in Washington State, this series depicts the conflicting worlds of preppers, those who don’t understand them, and those who fear and resent them.

The Restoration is the ninth book in the 299 Days series
When the Patriots finally launch their strike against the Loyalists, Grant Matson’s leadership, bravery, and training are put to the ultimate test. The 17th Irregulars are teamed up with regular military units and they must put their differences aside in order to successfully overthrow the Limas.
While the battle rages on, the Loyalists outside of Olympia start to pay the price for their allegiances to the wrong side of the Collapse, while well-intentioned others welcome the beginning of New Washington that recognizes fairness and hard work.
The battle winds down and a new day begins as the Team recognizes that victory does not come without loss. Grant, now a celebrated war hero, is not without his own personal hardships, and fears facing a new life without his family.