The Case of the Baited Hook 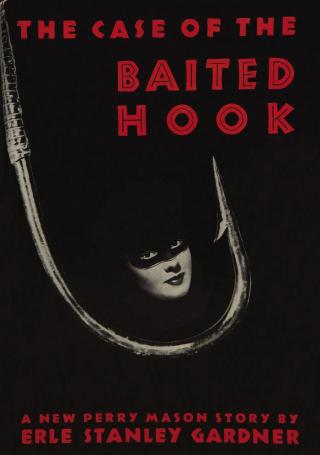 It was beautiful bait: two lovely thousand-dollar bills and a torn half of a ten-thousand-dollar note. Perry Mason swallowed it, hook, line, and sinker.
They had gone to a lot of trouble. They had Mason’s private number, woke him up and persuaded him to meet them at his office in the middle of the night. There he found a man and a girl; a man who knew exactly what he wanted but wouldn’t explain; a girl who wore a man’s overcoat, a mask — and wouldn’t speak. It was the girl who kept the other half of the ten-grand note. When and if they needed Perry Mason he’d get her half. Not until then would he know who his client was. Perry suspected he was being played for a sucker, but he was too interested to swim away.
The next morning, he felt the hook. It was murder, a murder obviously linked to his mysterious visitors. And the barb on the hook was that Perry couldn’t discover who his client was or what he was supposed to do. Della Street’s mocking jibes were hard to take.
A racing Gardner story full of action, suspense and one of the most original plots Gardner has ever created.

The Case of the Shapely Shadow

The Case of the Long-Legged Models

The Case of the Daring Divorcee

The Case of the Negligent Nymph

The Case of the Reluctant Model

Case of the Beautiful Beggar

The Cat Who Turned On and Off

Комментарии к книге "The Case of the Baited Hook"