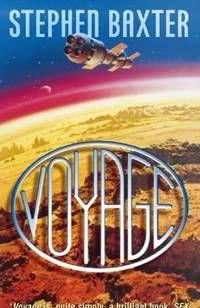 The book depicts a manned mission to Mars as it might have been in another timeline, one where John F. Kennedy survived the assassination attempt on him in 1963.

Voyage is the epic saga of America’s might-have-been — a powerful, sweeping novel imaginatively created from true lives and real events. NASA, the Saturn rocket, and historical figures from Neil Armstrong to Ronald Reagan are interwoven with unforgettable characters that only a world-class novelist could bring to life: Dana, the Nazi camp survivor who achieves the dream of his hated masters; Gershon, the Vietnam fighter jock determined to be the first African-American to land on another planet; Lee, the small-scale aerospace contractor with a big dream; Priest, who gives his life so that others might live to walk on Mars. And most memorable of all, Natalie York, the brilliant geologist/astronaut who is her own worst enemy, and best friend; a passionate woman who risks a career and a lifelong love for the chance to run her fingers through the soil of another world.

Voyage won a Sidewise Award for Alternate History, and was nominated for the Arthur C. Clarke Award in 1997.