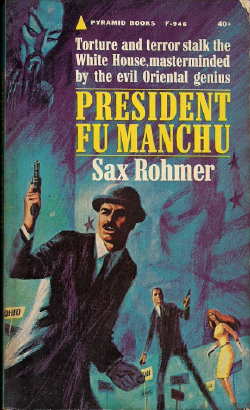 The United States is in the middle of a crucial presidential campaign when one of the two major candidates mysteriously disappears. Has he been kidnapped or killed? Only Denis Nayland Smith knows what evil force lies behind the crisis - the sinister genius of Fu Manchu - however even Sir Denis has not reckoned on the extent of his ambitions. Once a puppet candidate is installed in the White House the oriental fiend will be President Fu Manchu and the world will face its biggest danger yet.

The Wrath of Fu Manchu

The Bride of Fu Manchu

The Return of Dr. Fu-Manchu

The Mask of Fu Manchu

The Drums of Fu Manchu