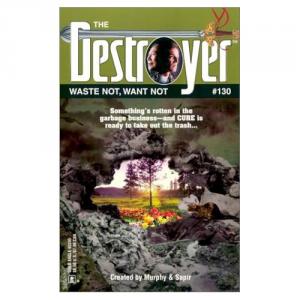 Something's rotten in the garbage business -- and CURE is ready to take out the trash . . .
IF IT LOOKS LIKE TROUBLE AND SMELLS LIKE TROUBLE . . .
Mayana -- a South American country known only for a mass cult suicide -- is poised to become the salvation of a trash-choked globe. An ingenious new device called the Vaporizer can turn garbage into thin air and trash into cash for the beleaguered nation. And what could be a more beauteous sight for a global environmental summit than barges piled high with the world's smelly refuse parading through Mayana's harbor.
Actually, Dr. Harold Smith smells trouble, and with the U.S. President headed for the summit, he dispatches Remo and Chiun to the scene, posing as garbage scientists. And not a moment too soon, since torpedoes are sinking garbage scows left and right, leaving a stinking mess and a huge crisis. It's clear that nobody -- including a Japanese industrialist, anex-Soviet premier turned peacenik environmental tree hugger, and the president of Mayana himself -- can be trusted, specially when the Destroyer uncovers a diabolical plot of global domination that promises to totally trash the free world . . .