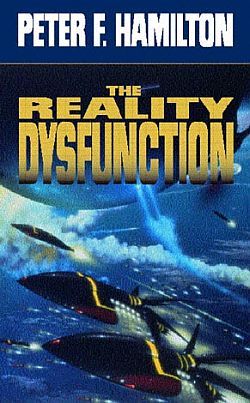 A nightmare with no end ....
In AD2600 the human race is finally beginning to realise its full potential. Hundreds of colonised planets scattered across the galaxy host a multitude of prosperous and wildly diverse cultures. Genetic engineering has pushed evolution far beyond nature's boundaries, defeating disease and producing extraordinary spaceborn creatures. Huge fleets of sentient trader starships thrive on the wealth created by the industrialisation of entire star systems. And thoughout inhabited space the Confederation Navy keeps the peace. A true golden age is within our grasp.
But now something has gone catastrophically wrong. On a primitive coloney planet a renegade criminal's chance encounter with an utterly alien entity unleashes the most primal of all our fears. An extinct race which inhabited the galaxy aeons ago called it 'The Reality Dysfunction'. It is the nightmare which has prowled beside us since the beginning of history.

This second volume of Hamilton's two-part book The Reality Dysfunction is as fast paced and densely packed as the first. It picks up the many plot threads left hanging in Emergence and runs with them, ending some subplots and beginning other more interesting ones. Joining the large cast of characters is Graeme Nicholson, a reporter stuck on the backwater planet of Lalonde, where mud and wood seem to be the only things in great abundance. But Lalonde is fast becoming the focus of an invasion that seems to defy time and logic, and soon Nicholson will regret ever learning about the biggest story to hit the galaxy in a thousand years.