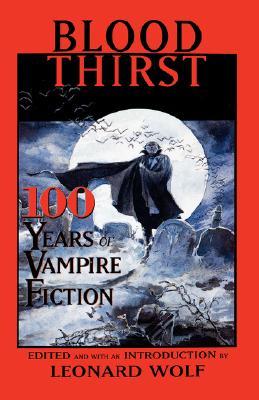 In the past hundred years, since the publication of Bram Stoker's infamous book, no literary figure has enjoyed a more horrific resiliency than Count Dracula. In film, television, novels, and short stories, he keeps coming back to life, fed by the vital imaginative energies of a world-wide audience that cannot seem to resist his abominable charms. Aristocratic and urbane, deeply erotic and profoundly evil, Dracula's bloodsucking savagery has cast a mesmerizing fascination not only over his victims but over his readers as well. And, as Leonard Wolf suggests, "Vampire fiction...exerts an amazing pull on readers for a reason that we may find disturbing. The blood exchange—the taking of blood by the vampire from his or her victim is, all by itself, felt to be a singularly symbolic event. Symbolic and attractive!" Now, in Blood Thirst; One Hundred Years of Vampire Fiction, Leonard Wolf brings together thirty tales in which vampires of all varieties make their ghastly presence felt;male and female, human and non-human, humorous and heroic;all of them kin to the dreadful bat. From Lafcadio Hearn, Mary E. Wilkins-Freeman, Edith Wharton, August Derleth, and Ray Bradbury to such contemporary masters as Anne Rice, Stephen King, Joyce Carol Oates, John Cheever, and Woody Allen, and in settings as diverse as rural New England and outer space, this collection offers readers a dazzling compendium of vampire stories. Wolf organizes the collection into six categories;The Classic Adventure Tale, The Psychic Vampire, The Science Fiction Vampire, The Non-Human Vampire, The Comic Vampire, and The Heroic Vampire;which allows readers to see the many guises Dracula's descendants have assumed and the many ways they can be interpreted. In his penetrating introduction, Wolf argues that such an arrangement enables us to see the evolution of the vampire from an unmitigated evil to a creature we are more likely to identify with. "In a century in which God and Satan have become increasingly irrelevant in the popular arts, there has been an accompanying secularization of the vampire idea. And, as the stories in Blood Thirst will show, sympathy for the vampire has grown as we have become increasingly interested in the workings of the mind." Indeed, the vampire's ability to change over time, to draw into itself such a richness of symbolic meanings, to conjure itself into so many diabolical shapes, may account for the enduring appeal of the literature written about it.
Here, then, is a definitive collection for aficionados and novices alike, and whether readers find the vampires who inhabit these pages sympathetic or horrific, psychologically intriguing or spiritually repellent, morbidly seductive or comically absurd,Blood Thirst gives us all something to sink our teeth into.

Kisses from Hell [Collection of stories]