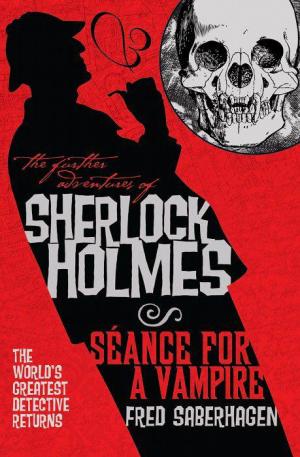 When two suspect psychics offer Ambrose Altamont and his wife the opportunity to contact their recently deceased daughter, the wealthy British aristocrat wastes no time in hiring Sherlock Holmes to expose their hoax. He arranges for the celebrated detective and Dr. Watson to attend the family's next seance, confident in Holmes' rationalist outlook on the situation. But what starts as cruel mockery becomes deadly reality when young, beautiful Louisa Altamont appears to her parents in the flesh as one of the nosferatu--a vampire! The resulting chaos leaves one of the fraudulent spiritualists dead. Sherlock Holmes missing, and Dr. Watson alone and mystified. With time running out, Watson has no choice but to summon the only one who might be able to help--Holmes' vampire cousin, Prince Dracula. Alternately narrated by Watson and the charismatic Dracula himself, Seance for a Vampire demonstrates that heroes are sometimes found in the most unlikely places. Saberhagen has recast Bram Stoker's paragon of evil into a noble, witty and chillingly powerful character.

The Third Book of the Swords