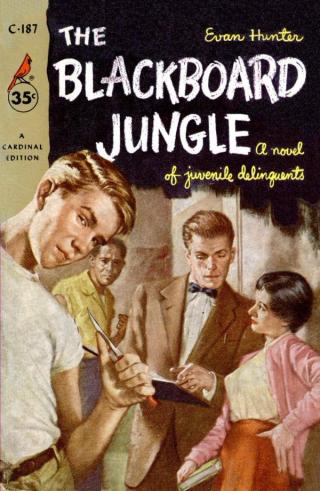 Rick Dadier wasn’t looking to be a hero, when he got his first teaching job at North Manual Trades High School. Admittedly the kids would probably be tough. That was likely to be true in any city vocational school. But Rick had a couple of years in the Navy under his belt, and he didn’t think any school disciplinary problems were going to throw him. Not when he was getting his first big chance at the job he wanted most to do. Not when Anne was so proud of him. Not when the baby was only a few months off.
No, he wasn’t looking to be any damned hero. He just wanted to teach.
But against his will, Rick was forced to become a hero within twenty-four hours after he stepped into his first classroom. From then on, things got tougher faster. It was one thing to face sullenness and impertinence, but it was another to stumble on a rape attempt. Any teacher might find himself in a war of wits against his pupils, but does he expect to find himself having to fight against teen-age gangsters for his very life?
The Blackboard Jungle is the first novel to dramatize one of the top social problems of our day. The reader will want to race through the completely gripping plot just as fast as he can turn the book’s pages, but he will think about its implications for a long time to come.