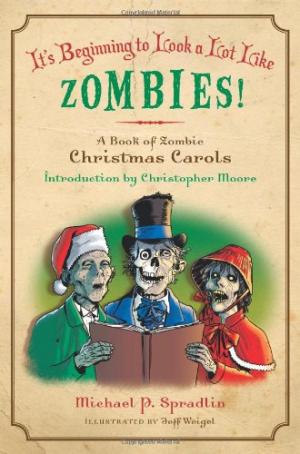 Fresh brains roasting on an open fire . . . Outside the temperature's dropping. The snow is falling, blanketing the world in white. Sleigh bells are jingling. Soon it will be that most wondrous time of the year! That time of flesh-devouring zombie horror! Yes, Christmas is on its way—and all the little boys and ghouls are dreaming of stockings filled with candied eyes and bleeding body parts. You'd better watch out! Santa Claws is coming to town—and he knows who's been naughty, who's been naughtier . . . and who'll taste best with a nice glass of Chianti! In celebration of this merry macabre season, we present a peerless compendium of more than two dozen of the most soul-stirring, brain-boiling carols composed specifically for the decomposing. Holiday favorites such as “I Saw Mommy Chewing Santa Claus,” “Deck the Halls with Parts of Wally,” and “We Three Spleens” are guaranteed to lift the spirits of the lumbering, shuffling undead and their temporarily still breathing meals-to-be. So put down your gore-splattered baseball bats and raise your voices in song! And sing loudly—to drown out all the screaming.

Keeper of the Grail

Комментарии к книге "It's Beginning To Look a Lot Like Zombies"