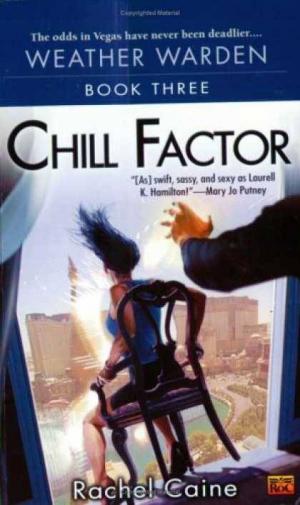 Weather Warden Joanne Baldwin hasn't had it easy. In the previous two books in Caine's sharply written series, she "had a really bad week, died, got reborn as a Djinn, had an even worse week, and saved the world, sort of" and "died again, sort of" before waking up human. Normally, Weather Wardens must simply protect the rest of the human race from deadly weather, but Joanne, who's deeply tough, resolutely moral and highly fond of fast cars and "bitchin' shoes," keeps getting tasked with saving the world. This time, a surly teenager named Kevin has holed up in Las Vegas with the world's most powerful Djinn and is wreaking utter havoc. In order to stop him, she'll have to surrender her own Djinn and lover David, die yet again, get resuscitated, interrogated and electrocuted by members of a powerful secret society, and experience countless other injuries and indignities, all the while trying to figure out who-among the detectives, Wardens, Djinns, Ikrits (a dark, undead Djinn), former bosses and former lovers-is really on her side. It's all a bit confusing, for Joanne and readers alike, especially those who haven't followed her through Ill Wind and Heat Stroke, but it's a rollicking good ride. Caine's prose crackles with energy, as does her fierce and lovable heroine.

The Power of Love

No Time to Die